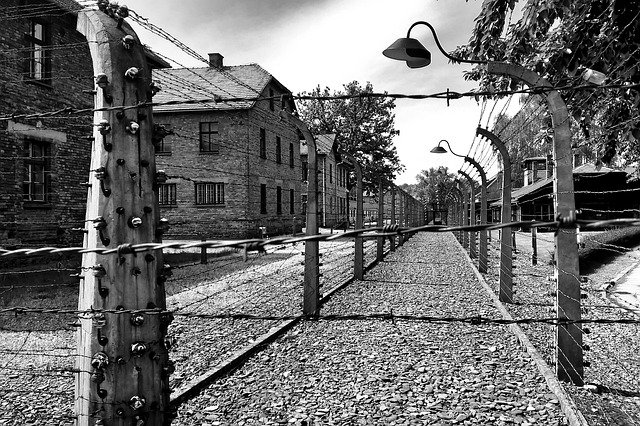 Located in Oswiecim in the Bielsko poviat (Landkreis Bielitz) in the Katowice region (Regierungsbezirk Kattowitz) of the Silesian province (Provinz Schlesien), and from 1941 in the Upper Silesian province (Provinz Oberschlesien), near the border with the General Government and at a convenient point of communication (main connecting lines Upper Silesia with the countries of southern Europe).

The camp was located in the Zasole district behind the Soła river in a complex of buildings of former military barracks and the former State Tobacco Monopoly. The largest concentration camp in Poland.

Established under the order of Heinrich Himmler of April 27, 1940. In the spring of 1941, the second part of the Brzezinka camp (Birkenau, Auschwitz II) was established, operating under the name of the prisoner-of-war camp (Kriegsgefangenenlager), which was a place along with the implementation of the plan for the extermination of Jews immediate mass extermination of Jews.

In the years 1942–1943 the third part of the camp (Auschwitz III) in Monowice (Monowitz) was created. On November 25, 1944, the structure of the camp was reorganized: the Birkenau camp was incorporated into the Auschwitz main camp (Auschwitz I), and the current Auschwitz III camp was renamed the Monowice concentration camp (Konzentrationslager Monowitz), to which all sub-camps organized at industrial plants were subject. Over 40 sub-camps subordinated to the camp worked for industrial factories and concerns as well as the SS. Slave labor was part of the destruction and brought economic benefits. At the beginning of the camp’s operation, a large number of prisoners worked on its extension.

From the beginning of the camp’s existence until the spring of 1942, almost exclusively Poles were imprisoned there. The first transport of political prisoners, numbering 728 people, arrived on June 14, 1940 from Tarnów. The camp in Auschwitz became the main center of the destruction of Poles, operating in underground structures, but also of political, social and intellectual activists. Hostages were also sent here, people caught in street round-ups or people isolated for preventive purposes. From 1942, transports with people from the displaced Zamosc region were sent here. After the outbreak of the Warsaw Uprising in 1944, about 10,000 residents of the capital were imprisoned in the camp – Tour to Auschwitz

At the end of 1941, 10,000 Soviet prisoners of war were sent to the camp, most of whom were murdered. From 1942, the camp became a place of extermination of Jews from various regions of Poland and the USSR. From this year, transports with Jews from other countries came in here. The camp also became the place of extermination of over 20,000 Gypsies.

The prisoners of the camp were murdered in the so-called death blocks and executions. Some patients were killed with injections of gasoline, ewipan and phenol. SS doctors also performed pseudo-medical experiments on prisoners; SS physician Dr. Josef Mengele conducted experiments on twins and studies of people with congenital physiological abnormalities. They were subjected to specialist medical examinations, and after their completion were killed with cardiac phenol injections.

From autumn 1941, people were killed using cyclone B in gas chambers. The bodies of those murdered were burned in crematoriums in Brzezinka. In this way, Jews exterminated by rail from many European countries were exterminated.